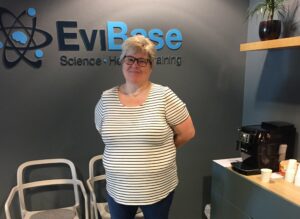 Britt has struggled with back problems ever since her teenage years. It just became worse and worse. “Its probably hereditary. Most of us deal with back problems eventually. I had surgery in 2005, which was absolutely necessary. I had a lot of problems with moving around before the surgery, and the pains were hell to live with. Some of my discs are broken and this is something that I have to live with. However, a chief physician in Bergen came up with a reassuring prediction. He said that, ‘my problems will most likely go away when I turn 60.’ This means that we have 10 years left before I am able to test the validity of this prediction. After I have started training, I have reduced my painkiller intake significantly,” Britt tells us. She is currently running her morning session here at EviBase clinic.

General practitioner Nils Kähler at the Helsepark here in Sandefjord asked Britt to give the EviBase clinic a try, and it had been a brilliant decision. “It would be an overreaction to say that my first time on the treadmill went swimmingly, however the progress came eventually. My movements and breathing became better and better, and I essentially became an overall happier person. Suddenly, I discovered that it was nice to be around people again, noticing that my pain had not only restricted my movement but had caused me to become introverted. I blossomed into a new person and my quality of life got better every day. For the first time, I even got told by my family to ‘chill out,’ when we were hiking out on the trails. It was a message that I was happy to hear. I was also well received at the training clinic, while the follow ups gave me the feeling of an extra layer of security. Furthermore, may I add that is very inspiring to see my progress at each control/checkpoint. It reassures me,” Britt tells us. She asks me to reiterate that training as a treatment instead of medicine is not a fantasy. It is real!

A better mother and grandmother

Britt lives in Kodal, but her grandchild Mikkel (2 ½ years old) lives only 15 minutes away in Andebu. “He is one of the driving factors that I keep myself fit. Last night he slept over at my place, and I took him to kindergarten today. I carry him around on my shoulders and we run all over the place. This makes me very happy. The difference between now and back then is basically night and day. Now I have a lot to give, both as a mother and as a grandmother. Nevertheless, I realize that training keeps me healthy, and it is crucial to keep it up. This summer I was on a camping trip with my family with a lot of good food and drinks. It took a couple sessions on the treadmill before I was back to my normal self,” the 50-year-old tells us. She originally comes from Bergen. “I have just renewed my membership here at the clinic for another year. This is the best investment I have ever done,” Britt tells us. 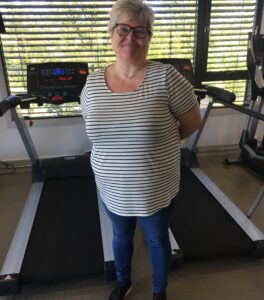 Britt likes to get her training done as early as possible. “I leave from Kodal around 7 in the morning and am in my training clothes about 20 minutes later. I become less and less motivated throughout the day, so I am made a habit of training early. The majority of people here are pleasant, while many of them are here for medical reasons. I am one of many who have tried other training sessions around town, but I have found that I don’t fit in there as much. I am most comfortable here, and nothing feels as good as the feeling you get after completing a difficult exercise session. As well as the back problems, there were also other consequential problems. High cholesterol, high blood pressure and so-called stress migraines. Fortunately, I have not expierenced these migraines at all in the past year. I have been able to put my cholesterol medicine away and my blood pressure in under control. I have trouble finding any downsides of becoming healthier,” says the happy and healthy grandmother from Kodal.

The better mobility and general health improvement are one thing, but the external benefits Britt has gained through her new training routines takes the cake. “New friends at the training clinic and the more social version of myself that I have become in my neighborhood is one thing, but the best benefit is the energy I now have for Mikkel and the rest of the family. Now I push myself forward with music in my ears and my grandson on my mind. My stubbornness in regard to training is also progressing as well. I always want to better myself. This is why I always push myself 100 percent. I only have one wish to end with, and it is that I hope that others that are in the same position as me, get the chance to train and better themselves at a nearby clinic,” Britt tells us as she walks quickly out the door. It used to be a lot slower…